Metal Repair and other Shipyard Activities

There are nearly one hundred shipyards around the United States and hundreds more around the globe. Activities at these shipyards include:

The shipbuilding industry’s goal is to keep people and products moving safely across our lakes and seas. This movement is critical to ensure that commerce functions without interruptions, scientists can complete research, and warfighters can defend us and our allies.

Many shipyards may have had a history similar to that of the Puget Sound Naval Shipyard in Washington. This shipyard was established in 1891.

The Puget Sound Naval Shipyard started building ships during WWI. During WWII, their main focus was repairing battle damage to the naval vessels of the US and its allies.

After WWII, they changed direction and concentrated their efforts on modernizing existing craft until significant developments in marine technology appeared, creating the need for new vessels once again.

Whenever metal repairs or the application of corrosion-resistant coatings are needed, VRC Metal Systems is at the forefront of cold spray technology. Learn more about our products and capabilities here.

Read on to learn more about the different activities involved in building, repairing, and modernizing today’s ocean-going vessels. 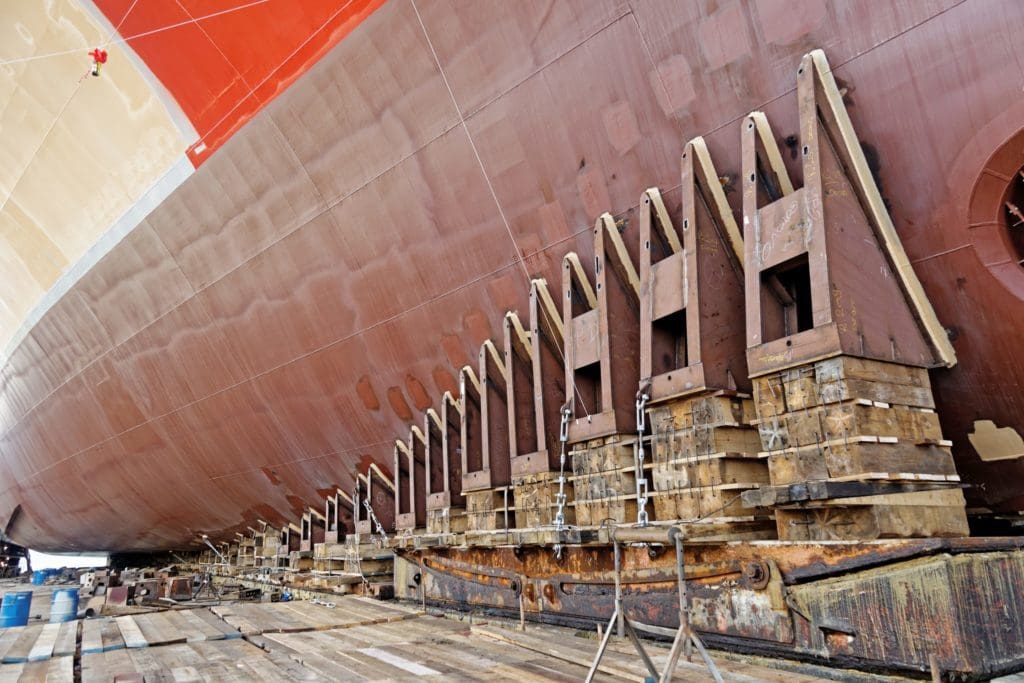 The original purpose of most shipyards was to build ships. In Colonial America, the primary need was for fishing vessels. As water trade increased, so did the need for larger dry-cargo ships.

Originally, hulls were made of wood frames. Wood planks were heated and warped to form curves around the frame. These planks were then made water-tight with pine tar. The pine tar was mixed with fibers to form a type of caulking to seal any gaps between the planks.

Copper plating was often attached to the hull with brass nails to create the earliest form of corrosion protection, and to keep the hull from being infested with woodworms.

The invention of the steam engine and processes for extracting steel and other metals came with the onset of the Industrial Revolution. With these innovations came new designs which radically changed shipbuilding.

Initially, metal replaced critical sections of the wooden hulls where sharp joints or corners were required. Eventually, that use expanded to metal plates bolted together to form the entire hull.

The two World Wars contributed to a significant expansion in the shipbuilding industry as more and more vessels were needed to transfer soldiers and war material around the world. Only two dry-cargo ships were built in the fifteen years before WWII in the United States.

The Victory-class cargo ship succeeded the Liberty design with a more powerful steam engine. The more powerful engine made this slightly larger vessel faster and able to out-maneuver German U-boats.

After World War II, international trade skyrocketed, and so did the need for larger and larger cargo ships. 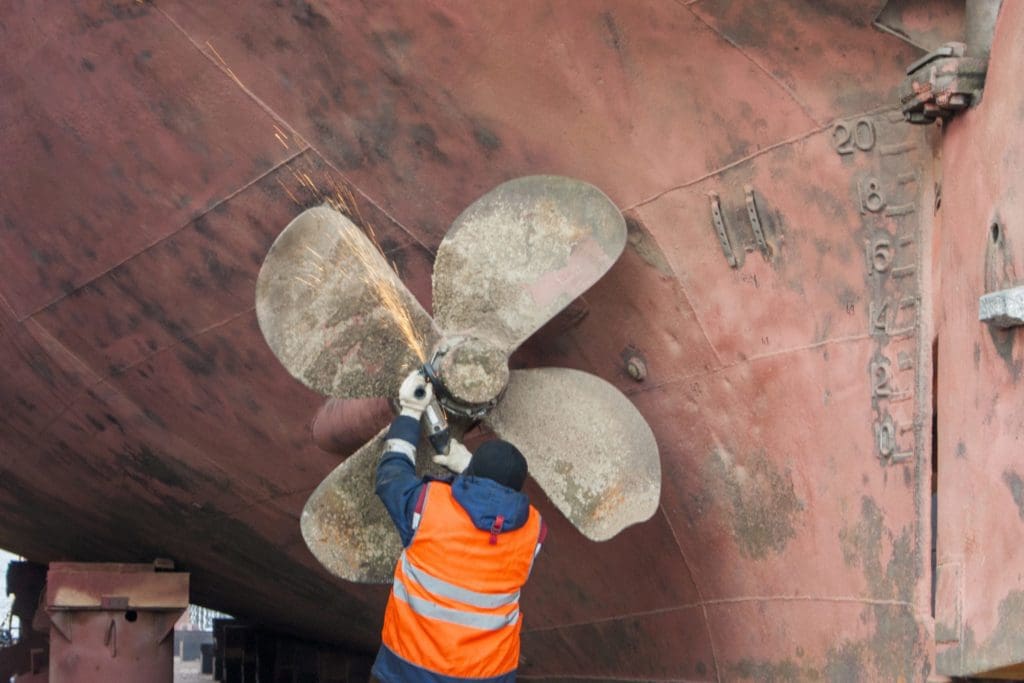 Thus, the next phase in the lifecycle of a shipyard.

The ship’s crew can perform much of the needed maintenance while at sea or in port. However, some repair and maintenance can only be completed in a shipyard under the supervision of classification societies such as Lloyd’s Register or Bureau Veritas.

The classification society designates a ship’s class. That designation defines the set of technical rules and standards that must be followed to keep the vessel and its crew safe.

The society also periodically surveys vessels to ensure the machinery and equipment is built and maintained to those prescribed standards.

Drydocking has been employed at shipyards for decades for manufacturing, as well as completing necessary repairs. The purpose of drydocking is to expose surfaces and components below the waterline for metal ship repair, replacement, or upgrades.

According to SOLAS (the International Convention for Safety of Life at Sea), a ship may be required to submit to a bottom survey as often as every two years, depending upon its classification.

Two of the most common operations performed in dry dock include inspections and hull and propulsion repairs. 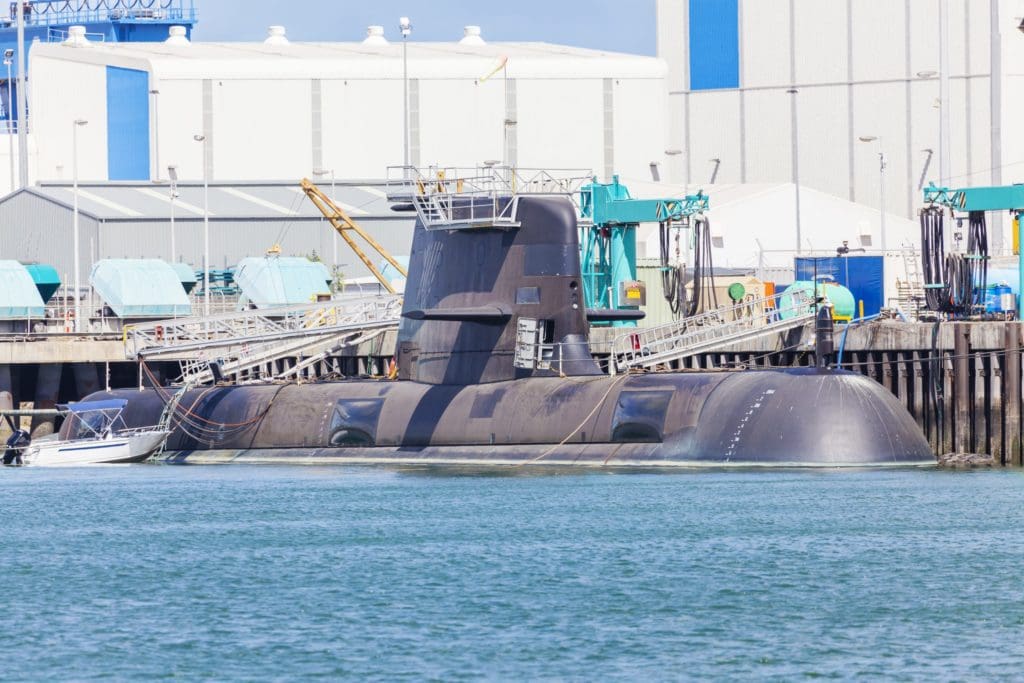 Additional tasks in or outside of dry dock can include upgrades to systems, components, and materials, such as:

An additional modernization is the use of the latest cold spray technology to complete metal repairs or add corrosion-resistant materials to existing componentry. Cold spray is a method for applying metals, metal alloys, and metal blends to an existing substrate.

Cold spray technology can be used to:

Rather than removing a compromised component or metal section for transport to a separate repair facility, portable cold spray technology, like the one developed by VRC Metal Systems, can be brought on-site for use.

The shipyards have come a long way since building wooden-hull fishing vessels. Submarines and research vessels are now familiar sights in shipyards as well, requiring inspection and repair.

Cold Spray for Any Point in a Vessel’s Lifecycle

Build, repair, modernize, repeat – apply cold spray technology at any point in the lifecycle of the modern shipyard.

Whether creating a new design feature or adding wear- or corrosion-resistant coatings, the highly experienced staff at VRC Metal Systems can get you started with the right solution.

There is no need to disassemble that equipment and wait for it to come back from the repair facility. Our cold spray system is portable and high pressure, providing cost- and time-efficient metal repairs.